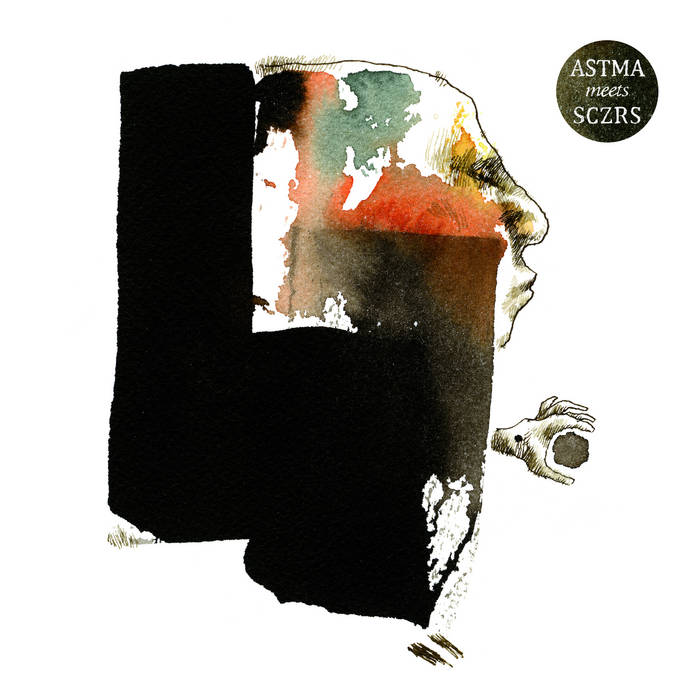 Mastering by Neurone
Artwork by Ambre

“Astma meets Sczrs” is a LP project based on a friendship synergy to push things further with the common wish to lead each musician towards something new. More than playing together as a quintet, “Astma meets Sczrs” project wants to be a reflexion about recording improvised music to make a record and obtain more instant compositions.

These two days recordings session provided time and space allowing each musician to have two different set up and be able to adapt their purpose according the contraint and the direction to give to the music. As well, Astma get his complete set up with Alexei Borisov playing electronics, voice, acoustic guitar and Olga Nosova on a large percussive kit composed with drums, various percussions, daily objects, recorder, pungi, zither and also an electronics set up. Sczrs extend his set up more largely for this session as Monobloc Sound Fidelity playing sampler and electronics, Cisco C. playing Cello and a more electronics set up with synths, and Anton Mobin on bass for the first time in ten years on a record and also playing cassettes.

The music proposed on this LP is based on basic constraints, some rules or just form suggested before playing as “make a drone”, “make a piece for child”, “do not play more than 2 seconds”, “play a single impact”... Contraints do not mean reduction of liberty but on the contrary make the music evolving on the degenerative way through something else or sometimes opposite to the first direction.

This album recorded in May 2014, mixed in 2015 and finaly released in 2016 is the fruit of a long labour in term of communication cause to the distance (France, Russia, Germany) to keep everyone alert and aware of the making of the project, but mainly an intense work of mixing and exchange, sharing ideas about the music and what we really want to do with tons of tracks and hours of recordings : on 24 pieces we selected 8 of them.

Videos of the recordings session by Oleg Kornev :

« ASTMA meets SCZRS » is the first volume of a serie of LP produced by SCZRS, and designed by Ambre. The next opus based on the same principles consists of the meeting between Sczrs and the mexican duo (sic) with the drummer Julian Bonequi and vocalist Rodrigo Ambriz.

B2 : fragment of "Bear Lullaby" song by Evgeny Krylatov and Juri Jakovlev from "Umka" (1969)

B5 : lyrics by Alexei Borisov for the song "Hot weather twist", composed for the band "Prospekt" in 1981.

Bandcamp Daily  your guide to the world of Bandcamp